Having read a post this morning that reminded me that in the northern hemisphere it was still October 14, anniversary of the Battle of Hastings, which brought Norman rule to England, I thought it might be fun to discuss Parke Godwin's Sherwood, which sets the story of Robin Hood in William's England - it makes as much sense as Richard the Lionheart, which was basically Walter Scott's idea. I went searching for a suitable picture of the book's cover when I discovered, to my dismay, that the author had died in June this year!

So let me be a little broader. Parke Godwin could  and did write fantasy, award-winning fantasy, but he was also, in my opinion, America's answer to Mary Stewart in writing historical fiction with just a touch of fantasy, and, at that, an American who wrote some of the best fiction about British legendary heroes I have ever read. He comes close behind Rosemary Sutcliff and Mary Stewart in my favourites list.

Let's start with his two Robin Hood books, Sherwood and Robin And The King. Robin is actually Edward, a minor English country gentleman when the Normans arrive. Robin is his mother's pet name for him - "Puck Robin". For various reasons not his fault he is outlawed and his property given to Ralph, the new Sheriff of Nottingham. But Ralph is actually a decent man who treats Robin's peasants well and when the loony Earl of Huntingdon tries to start a rebellion that Robin knows will lead to civil war, he finds he can't support it. As he and Ralph are locked up in the Earl's dungeon together, they must co-operate to get out. What happens then, I will let you find out.

It was a delightful book, though the sequel was much darker. There are also implications about what Robin wrote, once he learned how, and became interested in law, which I won't go into due to spoilers. Just read them, but keep a few hankies for the second book. It's sad!

The Arthurian duo is Firelord and Beloved Exile. They're set in fifth century Britain. Arthur is a stiff -as-a-poker Roman officer. One day, he is kidnapped by the faerie, who are neither Tinkerbell nor Galadriel's relatives, but the indigenous folk of Britain, scorned and mistreated by everyone, the poorest of the poor. And they're his mother's people - Ygerna was left by a faerie midwife with a Roman matron who hadn't been able to give birth to a live child and was persuaded the little girl was her own. Arthur becomes third husband to Morgana, the polyandrous tribe's leader, who loves him but says she can't just dump her other husbands for him. He must leave her to solve an emergency among his own people and never returns, leading to tragedy much later. But he becomes a king who has empathy for the poorest of his people.

The second book, Beloved Exile, is seen from the viewpoint of Guinevere, after Arthur's death. This Guinevere is tough, intelligent and arrogant. She also has a way of staying friends with men she has let down, such as Ancellius(Lancelot), whom she used when depressed and dumped to return to her husband. Now she has been kidnapped and sold into slavery among the Angles. Over several years, she comes to have a respect for the people who were her enemies, and see things their way, impressed by their democratic system.

Both books drew me in and swept me away. The characters were ones I cared about, but not perfect. They had major flaws and so were human and believable. And one of my favourite bits in Firelord is where Arthur tells a Christian knight, "Oh, go and look for your silly cup!" ( The Holy Grail).

Americans, be proud you produced a writer who could do such a wonderful job with other people's stories!

I'm going to miss him. 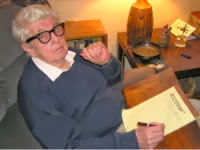 Posted by Sue Bursztynski at 4:25 PM