What I've just re-read: The King Must Die 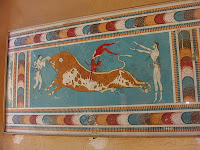 Unlike many of my other favourite books, I actually did read this when I was a child. Well, I didn't know it wasn't a children's book, did I? I was madly into Greek mythology at the time (still am, actually). And I had recently read Robert Graves' The Greek Myths (another book I hadn't realised wasn't for kids, so I made my older sister borrow it for me four times and puzzled everyone in my primary school class with my talk of sacred kings and triple goddesses...). So when I heard about this novel on the radio - probably the ABC - I just had to go and get my own copy. It is still on my shelves, falling apart, and a couple of weeks ago I plucked my biography of Mary Renault from the shelves, finally able to read it. It's by David Sweetman, if anyone is interested. He had interviewed the author for a TV documentary and finally decided to do a book. It's a fascinating read, mingling her life story with some of the possible reasons why she wrote as she did.

Interestingly, she studied at Oxford and one of her teachers there was J.R.R. Tolkien and another person from whom she learned there was related to Arthur Evans, who dug at Knossos.

After all this, I just had to go and dig out my copy of The King Must Die and re-read it, of course. I will have to get hold of a new copy if I want to read it again without it falling completely apart. Meanwhile, I found it just as wonderful as when I was eleven, only now I get all the bits that went over my head when I was a child.

It tells the story of Theseus from his childhood to his return from Crete. She does a very fine job of explaining how the various things might have happened. She sets it in a specific time; at one point, there's a conversation about this Pharoah who's good for craftsmen and only worships one god. Theseus kills "Kerkyon" at Eleusis as part of the yearly king-sacrifice in the matriarchal society and becomes "Kerkyon" himself, that being the king's title, not his name. He clears up the bandits on the Isthmus with his army and allies, not by himself - and he's a short, assertive man, not a hulking six-footer, because a big man couldn't have been a bull-dancer. The youths and maidens are taken to Crete to be bull-dancers, not to be eaten by the Minotaur (and Minotaur is the title of the heir to the throne, like "Dauphin" or "Prince of Wales") - the bull-headed man is a heraldic device, not an actual monster. Despite all this, Theseus believes firmly that he has a relationship with the god Poseidon, even though he knows King Aigeus is his actual father. And there's the odd fantastical touch - Theseus knows when an earthquake is coming. Mainly, it's about the clash between old religion and new. Women don't get very good press in this book, apart from the odd Amazon and the hero's mother, who respects and serves the Goddess, but is a part of the male-based sky-god worship. Theseus really loves Ariadne, but she lets him down. He understands why, but can't bring himself to take her home. The reasons for all this are probably more about Mary Renault than about the characters, but I can see it happening this way. Having read Robert Graves, I understand the background.

If you just want a great action-adventure which gives a fascinating interpretation of a Greek myth, you can still enjoy this. You're unlikely to find it in your local bookshop any more, but it's available. I'm going to order my second copy on-line; I think I'm going to need it.
Posted by Sue Bursztynski at 3:35 AM