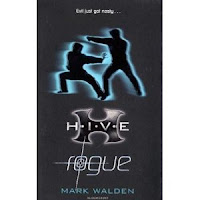 At the end of H.I.V.E: Dreadnought, Otto Malpense was left in the hands of the enemies of G.L.O.V.E, international organization of super-villains. In this series, which began with H.I.V.E: Higher Institute of Villainous Education, there are villains and villains. There are the good guy villains and the bad guy villains. G.L.O.V.E represented the good guy villains who just wanted to go around in snazzy black clothes, stroking white cats and making lots of money – but because, in the end, they were villains, there was politicking and backstabbing going on even among them – the cause of some of the drama in later novels of the series.

Otto, who can interface physically with any computer, appears to have gone rogue. He’s now working for the bad guys, and has been involved in some assassinations. Even his school principal, Max Nero, that Dumbledore of the villain world, is ruefully considering ordering his death. Of course, his schoolmates aren’t willing to let that happen – and they have talents of their own…

The first novel in the series presented a sort of Hogwarts for villains. Young potential super-villains were taught how to manipulate the world for their own gain, using their various talents. There was even a sort of Neville Longbottom character, whose genius with plants ended up creating a giant mutant plant that nearly ate the school. It was very funny and there were references to spy movies as well, except that the cat we usually see sitting in the villain’s lap was one of the teachers, trapped in a cat’s body, her jewelled collar used to communicate.

All the novels so far have been entertaining, but they’ve become serious. Characters learn things about their backgrounds they would rather not have known. Characters die. This one has a lot of martial arts in it, as Otto’s friend Wing and Wing’s mentor, the ninja-style woman Raven, go in search of him and encounter enemies galore. It’s certainly exciting – but it’s much grimmer than the original novel and this should be taken into account. There is one more in the series; I can only hope that it doesn’t end in quite the bloodbath that I suspect will happen. There are too many likable characters I’d prefer to see survive!
Posted by Sue Bursztynski at 1:56 AM