WITH A SWORD IN MY HAND By Jean-Claude van Rijkeghem and Pat van Beirs. Translated by John Nieuwenhuizen. Sydney: Allen and Unwin, 2010 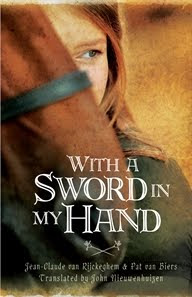 We don’t know a lot about Margeurite de Male, last heiress of the Counts of Flanders. We do know what she probably looked like; the book’s endpapers show her portrait and if this is the typical flattering mediaeval nobility portrait, she must have been truly plain. We know who she married and when and how long she lived.

Other than that - who can say? The heroine of this novel, Margeurite is presented as strong, stubborn and intelligent. She hates embroidery, rides her father’s retired war-stallion, secretly trains in the use of a rapier and swears a lot. She trips up her governess with dried peas so that she can run out to have adventures with the squires. She notices boys, and goes through the pangs of being dumped.

Who can say it wasn’t just this way? Whether or not it happened like this, we feel we’re right in the fourteenth century. We can almost smell the stinks, hear the noises in the streets of Bruges, where Marguerite and her friends from the castle sneak out to watch, enthusiastically, as petty thieves and other such criminals are executed. Marguerite sees nothing wrong in this; after all, these people have had the attentions of a priest, so they’re in heaven after their horrible deaths, aren’t they? We shudder at the detailed description of the plague as it returns and spreads.

This is a beautifully-written novel, beautifully translated by John Nieuwenhuizen who, as well as being an experienced translator, also has plenty of understanding of young people and reading, from his long time in schools.

Give this to teenage girls who have had enough of the vampires.
Posted by Sue Bursztynski at 4:05 AM

Labels: With A Sword In My Hand review.